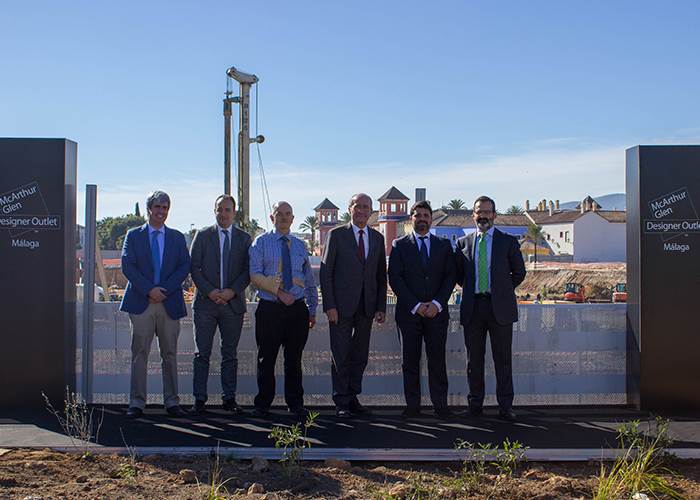 The €140 million development will span 30,000 sq m of retail space and is being developed in two phases. When complete, the centre will be home to a mix of over 170 brands, including some of the most sought-after luxury and designer brands, alongside other international and local brands - all offering 30%-70% discount. Phase one is scheduled to open late 2018 and will comprise 17,500 sq m of retail space including 100 stores.

McArthurGlen Designer Outlet Málaga will be located adjacent to the successful Plaza Mayor Shopping Centre, the city's most visited shopping centre, which receives over 10 million local and international shoppers every year, and is managed by Sonae Sierra.

José Luis Arenas, McArthurGlen's Development Manager for Spain, said: "Today marks an important milestone in this pioneering development which will deliver the first ever designer outlet in southern Spain. Three years after we announced our partnership with Sonae Sierra we are excited to celebrate the construction phase of this landmark retail project, which also marks McArthurGlen's entry into the Spanish market.

We continue to work very closely with the regional authorities to ensure our presence delivers positive benefits for Málaga. When the centre opens in 2018 it will bring significant employment to the region as well as a unique retail offering to three million local consumers and the 10 million tourists who visit Málaga every year."

Alexandre Pessegueiro, Sonae Sierra's Head of Asset Management Spain, said: "The laying of the first stone of the new McArthurGlen Designer Outlet Málaga symbolises Sonae Sierra's commitment to the Spanish market with a major investment adjacent to our first shopping centre in Spain developed fifteen years ago. This project will ensure a unique offer of luxury and designer brands and reinforce a singular commercial complex in Spain. I would like to thank the City Council and the other Public Administrations for the trust they have shown us to carry out this project."

Francisco de la Torre, Major of Málaga said: "This initiative highlights once again that Málaga is positioned, both nationally and internationally, as a very attractive city for investments. At an economic and social level, and in respect to the tourism industry, McArthurGlen Designer Outlet Málaga comprises substantial advantages for the capital of the Costa del Sol and its surroundings. It also brings new opportunities for the local economy and employment. The developers forecast the new centre will generate 1,000 new jobs once it has been fully completed. For the last few years the Málaga City Council has been working very closely with McArthurGlen and Sonae Sierra on this project, which is an example of public-private collaboration for the implementation of other important projects for the city."

McArthurGlen Designer Outlet Málaga will be situated in a prime location just three minutes by train from Málaga International Airport, through which over 14 million passengers pass every year.

It is also strategically positioned adjacent to both the MA-20 and MA-21 motorways which provide rapid access to Málaga city centre, wealthy Marbella, and other key centres further afield. The centre is also just 12 minutes from Málaga central rail station and 20 minutes from the Port of Málaga.