To watch the Cash & Rocket 2015 round up video, please click here.

The curtain has come down on this year’s edition of the world’s coolest female-only car tour, Cash & Rocket, with McArthurGlen as tour partner for the second year running.

The tour, made up of 70 influential women and 35 luxury cars, kicked off in London, stopping over in Paris, Lyon and Milan, before finishing in Cannes to join up with all the glamour of the international film festival. The tour was all in the name of raising money for three charities across Africa: Shine On Sierra Leone, Orphan Aid Africa and Sumbandila.

The entire event has so far raised over $1.65 million (€1.45 million) for the 3 charities involved and firmly supports our belief and responsibility to help future communities grow and prosper.

Shaeren McKenzie, Group Marketing Director, McArthurGlen, says: “We’re very proud to have sponsored Cash & Rocket’s fund-raising tour. Cash & Rocket is about ‘making a difference’, which is exactly what we look to do at McArthurGlen in the 20 communities where we operate.

“We look to create communities of the future, through the initiatives that we support and the partnerships we form.”

The convoy of Cash & Rocket ladies took time out from the road to attend fabulous parties hosted by Valentino and Vogue — meeting the great Franca Sozzani, Editor- in- chief of Vogue Italia. They also enjoyed lunch and a shopping spree at our very own McArthurGlen Designer Outlet in Serravalle, Italy — Europe’s largest luxury designer outlet.

We would like to thank all who have contributed to this cause and donated to our team. 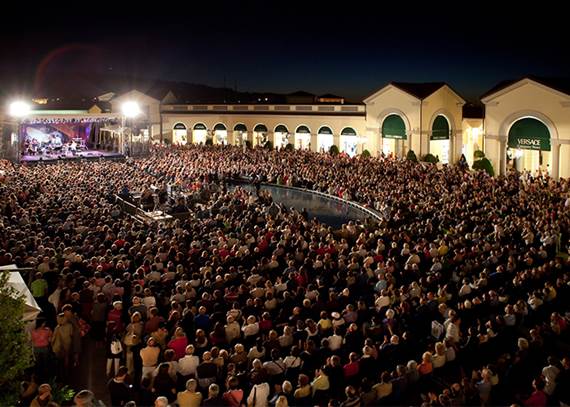 McArthurGlen has partnered with Universal Music Group to curate its biggest Italian music festival. #ModaMusica will comprise a series of 16 summer music events...