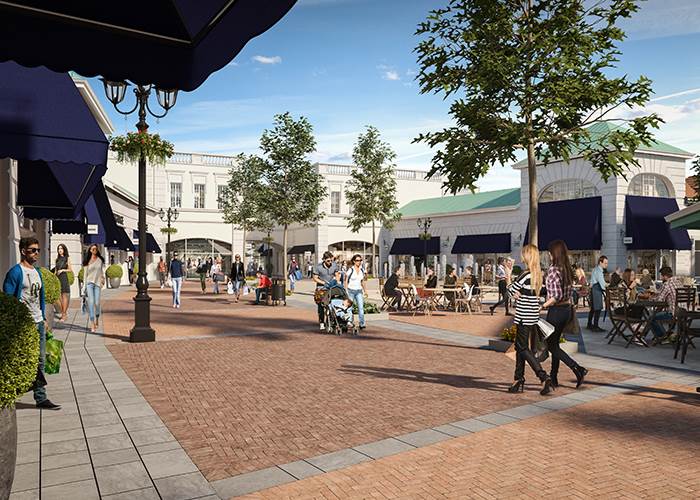 U+I and Rioja Developments secured planning approval for Cannock Designer Outlet from Cannock Chase District Council in September 2016 following extensive consultations with the local community. The establishment of the joint venture will see a combined investment of more than £160 million in the project with the development spanning 26,500 sq m of GLA across two phases and including improvements to the road infrastructure.

Gary Bond, Joint Managing Director of Development at McArthurGlen, said: “We are delighted to announce what will be the Group’s twenty sixth centre and our seventh in the UK, and we look forward to working with our joint venture partners U+I, Aviva and The Richardson Family. The new centre will sit within a rapidly growing portfolio which currently has an active development pipeline of 150,000 sq m.”

Giles Membrey, Managing Director at Rioja Developments Limited, said: “We are delighted that after many years working on this project, we will be seeing it come to fruition in 2018. This is the best site in the West Midlands for a designer outlet village and the brand interest in the scheme has been phenomenal.”

The project will be developed and built by McArthurGlen, U+I and Rioja Developments, and once it is completed, McArthurGlen will manage the centre.

Construction of Phase I will begin in the early part of 2018 and the opening is planned for spring 2020. The centre is expected to generate significant local economic activity over the next ten years; creating over 1,000 jobs and increasing visitor numbers, benefitting the local community and its businesses. Excellent transport links will mean the centre is perfectly placed to provide a major shopping attraction for the large local catchment area and the 39 million people who visit Birmingham each year.

Phase I will feature over 80 stores plus restaurants and cafes, a children’s play area and 1,400 parking spaces, with views over the beautiful Mill Green Nature Reserve. The contemporary designer outlet will be built according to meticulous standards of architectural design, which reflect and respect the best local architecture, and the natural environment surrounding the centre. There will also be a significant investment in landscaping and planting to further enhance the existing location and create a delightful shopping experience.

Matthew Weiner CEO at U+I Group Plc, said: “We are delighted to be working as development partner with McArthurGlen. The site’s location and potential are enormous and now that we have secured the planning consents, we are focussed on working with our partners to transform this site into a thriving community hub. The high quality shops, restaurants and other amenities will attract visitors from near and far, stimulate the local economy and create over 1000 jobs. Importantly, this project will protect and enhance the natural environment which surround it.”

McArthurGlen Designer Outlet Cannock will be situated in what is one of the most densely populated and affluent catchments in the UK. Over 11 million consumers live within a 90-minute catchment, one of the largest in McArthurGlen’s UK portfolio. It will be located close to many of central England’s most popular attractions, including: the Cannock Chase Area of Outstanding Natural Beauty which attracts two million visitors a year; Alton Towers, the UK’s largest theme park; Stratford-upon-Avon, the home of Shakespeare; the iconic West Midlands Safari Park, and the popular chocolate factory at Cadbury World.

Councillor George Adamson, Leader of Cannock Chase Council said: "The Council has supported the Outlet Village scheme over many years and I am pleased that it is now coming to fruition. It will become a major tourist destination and is a major boost for Cannock Chase."

Tony McGovern, Managing Director of Cannock Chase Council said: "The McArthurGlen Outlet Village will generate significant employment opportunities in the West Midlands and provide a regional shopping destination that is accessible and high quality. The Council is delighted to be working in partnership with U+I, Rioja Developments Ltd, McArthurGlen Group, Aviva Investors and The Richardson Family to deliver this fantastic facility".

The centre will have excellent access to key arterial routes connecting The Midlands with the rest of the UK, including: the M6, M6 Toll, A34, A38 and A5. Directly adjacent to the site is the A460, a major arterial route connecting with the M6 Toll. There is direct access from nearby Cannock railway station, as well as amenities for all visitors arriving by car, bicycle, coach or bus.

The five-minute walk to Cannock town centre and the railway station will be linked by a new footway and cycle path running through the nearby nature reserve, serving as the route for the new Heritage Trail. It is a 40-minute direct train journey from Cannock to Birmingham New Street station, the main interchange station for Birmingham and the greater Midlands region.

Over the past year, 12 million passengers used Birmingham Airport. Located just 40 minutes away from our centre, it is the UK’s seventh busiest airport. An important transport hub for the region, approximately 50 airlines operate more than 140 direct routes to destinations worldwide, including: New York, Istanbul, Dubai and many European hubs.