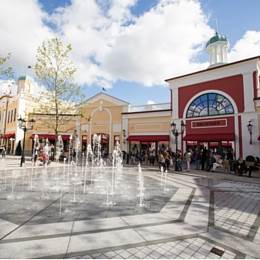 Shoppers  from around the region were attracted by the centre’s superb mix of premium, luxury and lifestyle brands including Polo Ralph Lauren, Gucci, Armani, Furla, Boss, ESCADA, Versace, Lagerfeld and 88 more as well as new stores including Belstaff, Adidas, Diesel, Liebeskind Berlin, Calvin Klein, Comma, Tiger of Sweden, Rich & Royal, Timberland and Jack Wolfskin - all offering year-round savings of between 30 and 70 per cent in a beautiful, high-quality shopping environment.

John Ralston, Centre Manager of McArthurGlen Neumünster, says: “We were delighted to welcome a record number of nearly 100,000 visitors. The arrival of 35 new stores has allowed us to increase the breadth of our fashion offer which will help to boost our appeal to local shoppers and tourists from around the world.”

The new extension has added  7,000 sq m of gross leasable space to the centre near Hamburg, creating a shopping paradise of 130 shops in a total of 27,000 sq m of premium retail space.  A further 950 parking spaces have been added, bringing the total to just below 3,000.

An additional 250 new jobs have been created which will bring the number of people employed at the centre to over 1,000.

Since opening three years ago, the Neumünster outlet has welcomed over 6 million customers including shoppers from Hamburg and the local region as well as tourists from Scandinavia, China, South East Asia, the Middle East and Russia.

McArthurGlen Designer Outlet Neumünster has been developed, is co-owned and is managed by the McArthurGlen Group.