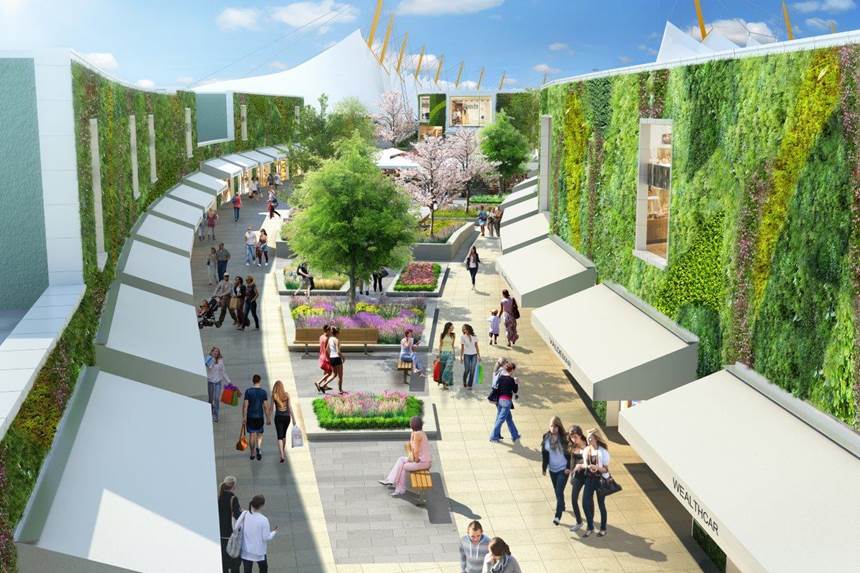 LONDON, 17th April 2019 – McArthurGlen Designer Outlet Ashford announced that work has started on Europe’s largest living wall installation, which forms part of the centre’s £90 million expansion. Made up of approximately 120,000 plants, the 25,000 sq. ft. living wall installation is set to create a striking atmosphere in the centre, with beautiful vertical gardens covering the walls of the new entry promenade, various walkways and many of the new stores.

Chichester-based company, Biotecture, will be designing, growing and installing the £1.5 million living wall, which will make McArthurGlen Designer Outlet Ashford one of the world’s greenest shopping centres.

The thousands of plants required for the project - equating to the length of 60 double decker buses - are currently growing in Biotecture’s West Sussex nurseries. The company has taken on additional nursery space to accommodate the 8,000 or so hydroponic growing panels.

The living wall has been designed as part of McArthurGlen Designer Outlet Ashford’s commitment to creating the best possible experience for its guests, with a visit to the centre providing an exciting day out with entertainment, dining and relaxation options for the whole family. According to Biotecture, there are several benefits to incorporating plants and green infrastructure within urban environments. Living walls are proven to help uplift people, reduce air pollution, aid biodiversity while meeting sustainability targets and improving performance.

The wall will include leafy greens, background foliage, plus seasonal pops of colour. Some of the plants to be featured include Fortune Spindle, Boxleaf Honeysuckle and Ivy providing year-round coverage and texture, as well as Elephant’s Ears ‘Baby Doll’, Rose of Sharon, Heuchera and Viola to provide bright hues in shades of pink, purple, lilac, yellow and white.

Peter Corr, Centre Manager of McArthurGlen Designer Outlet Ashford said: “As South East England’s leading designer outlet, and just over 30 minutes from London, our centre has seen 18 years of growth and evolution. We welcome over 3.6 million visitors every year and in response to market demand, this autumn we are launching a new phase that will elevate the whole shopping experience for our guests and the retail environment for our brand partners. This spectacular living wall installation is a key feature of this exciting expansion that will attract new shoppers locally, from London and also internationally.”

Construction on McArthurGlen Designer Outlet Ashford’s new 100,000 sq. ft. expansion began last January, its first extension since opening in 2000. The existing 185,000 sq ft. centre, which has the world's largest tented retail structure, was designed by the renowned architect Lord Richard Rogers who is famous for the Lloyd's building in London as well as The O2 Arena.

When the expansion opens later this year, McArthurGlen Designer Outlet Ashford will introduce up to 50 new premium and luxury brands, while creating 500 new jobs for Ashford’s local community. New facilities will include an events space, food piazza, interactive children’s play area and 725 new car parking spaces will also be delivered

This second phase at Ashford Designer Outlet comes at a time of rapid growth for McArthurGlen, which opened Europe’s first designer outlet in the UK in 1995 and now operates 24 centres in nine countries. In 2018, the Group announced it would be investing €1 billion in four new centres and seven centre expansions in some of the most densely populated catchments and key tourist destinations in Europe and Canada by 2021. These projects will create more than 800 new stores to cater to the growing demand from shoppers and tourists seeking the finest retail experiences and great value for money.

The company will enter its 10th market when it opens the first designer outlet in the south of Spain in Malaga this autumn. Construction is now well underway on its seventh UK centre, a new £160 million development just 30 minutes from Birmingham in the West Midlands, which will open in 2020 with over 80 stores.

In November of last year, following over 20 years in planning, McArthurGlen obtained final approval for the first and only luxury designer outlet in the western Paris area. The €150 million centre will span 215,000 sq.ft of retail space with 100 stores and seven restaurants and is expected to attract 2.5 million visitors per year when it opens in 2021. It will also host a unique Artisan’s village, known in French as a “Maison des Métiers d’Art”, promoting the savoir-faire of French crafts and artisanship.