UPDATE 30th July: Newtown Road is now open for road users, with full pedestrian access being available from the 2nd of August.

These planned improvement works form part of the £90 million expansion of Ashford Designer Outlet - one of Ashford Borough Council’s Big 8 projects, which aims to drive long term economic growth for the area.

When it opens in Autumn 2019, our expansion will introduce 50 new premium retail brands and restaurants, creating 500 new jobs for the local area. The improvements to local roads and pedestrian walkways surrounding the centre are part of a long-term project to make roads safer and improve traffic flows.

The planned infrastructure improvements will include the introduction of a signalised junction and a pedestrian crossing, which will make it easier and safer for people to move between Ashford International Station, the town centre and Ashford Designer Outlet both on foot and on  bike. This will include a complete re-landscape of the area.

The expansion of Ashford Designer Outlet and infrastructure improvements were granted planning permission by Ashford Borough Council in 2015.

When will the roadworks start and finish?

The improvement works will begin on Monday 13th May and will run for twelve weeks. The maintenance and improvement projects have been carefully planned to allow road works to be completed safely, while keeping disruption to road users to a minimum.

Where are the roadworks?

Due to the nature of the works, Newtown Road will be closed at the junction with Romney Marsh Road [A2042]. There will be no access to Ashford International Station and its car parks from Romney Marsh Road [A2042]. A fully signed diversion route will be in place via Orbital Park Roundabout and Crowbridge Road. Access to the centre is unaffected. Please refer to the below map.

Who is doing the work?

Why is a second phase of work required?

McLaren Construction and Walker Construction have advised that in order to complete the Newtown Road improvement works in their entirety, a second phase of work is required. The planned infrastructure improvements will include removing the interim islands and installing a new, controlled pedestrian crossing and new table top ramp at the crossing. New paving on footpaths will also be added, and the lighting and signage improvements in the area will be completed.

How do I avoid the works?

Drivers are advised to check their route and allow extra time for their journeys where needed, especially at peak times.  McLaren Construction and Walkers Construction have released a series of tips to help drivers navigate the improvement works during peak periods:

How much is the work costing and who is paying for it?

These works form part of the £90million expansion of Ashford Designer Outlet. McArthurGlen has committed £1.5 million to the local community as part of the expansion, this contribution will include:

Where can I find more information about the works?

There are detailed planning application documents publicly available at http://planning.ashford.gov.uk/Default.aspx

Who can I talk to about these works?

Please email enquiries@ashfordexpansion.co.uk  if you have a question. 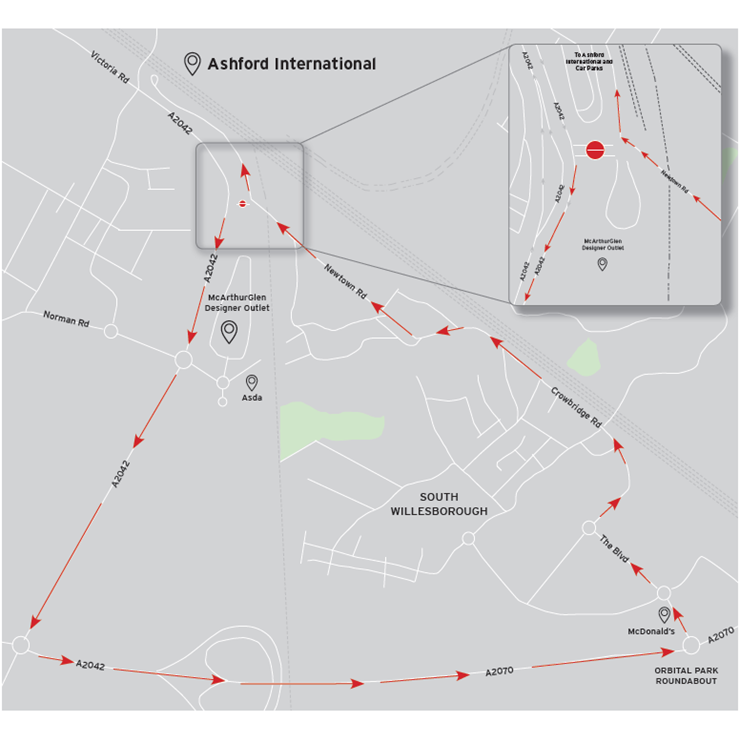